Exception  I06-E6 4/2010 Emergency Power Systems states that if the programmatic needs of the project require an emergency power system beyond that required by I06:

For Zero Energy Certification, which has no back-up energy requirement, a combustion-based emergency generator may provide electricity to support emergency systems, if the connecting system is sized to provide power only to the emergency systems mandated by code.
The project team must provide a narrative explaining the need for backup power, particularly with regard to the project’s size and function, and describing how extensive effort has been made to reduce the size of the system and prevent its use.
Note that if the project were targeting Energy Petal (vs. Zero Energy) certification, the project would need to use I06-E6 4/2010 Emergency Power Systems, as amended in Dialogue post "18-0326 v3.1/Emergency Power System Approval Request" and sufficient battery backup would be required to supply the equivalent of 10% of lighting for a week, at minimum, before combustion based backup would be allowed.
DocumentationAll projects using emergency power generation:

Projects with a hard piped LPG system must also include:

Exception I06-E4 5/2009 Specialized Combustion states that "combustion-based solutions for isolated applications, such as for Bunsen burners in a laboratory, are allowed" under this exception.  However, please note that in order to use this exception, the project team must submit the details of their proposed use of combustion to the Dialogue and receive written permission from ILFI.  (All citations from the v3.1 Energy Petal Handbook p12.)

Exception  I06-E5 8/2011 Ornamental Fireplace in Transects L1, L2, & L3 states that development is allowed in Transects L1 and L2 Transects (per the Living Building Challenge Standard), "it is acceptable to install a single indoor woodstove or fireplace" and/or "one outdoor fireplace" so long as neither is used for "primary, day-to-day heating" nor use a propane igniter.  Fireplaces are allowed in residential projects in Transect L3, but must meet current Nordic Swan emission and efficiency standards, and the project must be in a region that is in compliance with the EPA 2013 PM2.5 primary annual fine particle standard of 12 micrograms/cubic meter. Any allowed fireplace or woodstove should not be included in the calculations required for I06 - Net Positive Energy.  (All citations from the v3.1 Energy Petal Handbook p13.)

Exception  I06 - E7 11 / 2012 Periodic Cultural Festivals states that "Periodic cultural festivals are allowed to use gas water heaters as a backup to the regular kitchen hot water."  However to be guaranteed use of this exception, the project team must "provide a narrative describing the hot water requirements and alternatives explored in an effort to avoid this Exception, as well as demonstrate through sub-metering that the gas is only used during festivals and not during regular occupancy."  (All citations from the v3.1 Energy Petal Handbook p14.)

Exception  I06-E9 12/2014 Industrial Peak Load states that industrial applications are allowed to use propane gas water heaters as a short-term peak load backup to their regular domestic and process hot water system. The team must provide a narrative describing the hot water requirements and alternatives explored in an effort to avoid this Exception, as well as demonstrate through sub-metering that the gas is only used for the short-term processing peak load (i.e., winery “crush,” which is approximately six weeks long) and not throughout the year.  (See the v3.1 Energy Petal Handbook p15.)

Exception  I06-E11 11/2014 Industrial Emergency Backup states that industrial uses may use diesel backup power if they can demonstrate that the team has minimized the amount of backup power required and that the alternative systems available will have a significant negative impact due to danger, inability to provide sufficient power, or significant environmental impacts. Teams using this Exception must justify the project’s requirement for diesel as part of I06-a Exception Narrative.

Exception  I06-E14 4/2016 Combustion in Commercial Kitchens allows commercial kitchens - "where electricity-based equipment will not adequately serve the cooking needs of the facility, and where efforts have been made to find alternative solutions and minimize combustion impacts" - to use combustion-based equipment.

The project team must explain the proposed use, why electricity-based equipment is not functionally equivalent, and efforts both to source non-combustion and to minimize the impacts of combustion. Utility bills and BTU/ kWh calculations (using 1 kBTU = 0.293 kWh) that demonstrate the offset of combustion energy through on-site renewable production are also required. (All citations from the v3.1 Energy Petal Handbook p16.)

Currently, the use of biofuel for combustion is not allowed in LBC projects.

The below guidance has been developed for use by project teams who would like to propose a biofuel system to be considered for an exception. Any proposal to use biofuel / biogas based systems will be considered by the International Living Future Institute (ILFI) on a case by case basis. Approval of proposals is not guaranteed. Any approval of such use will take into account supporting data provided by the team with regard to the following principles:

Sourcing of biofuel should be from available, long term, sustainable (e.g. closed-loop) sources, such as:

Projects should avoid biofuel sources and systems that cause environmental degradation or reinforce other negative impacts, such as:

Exception  I06-E16 Off-site Renewables addresses situations where due to scale, high energy intensity, or grid issues, buildings are physically incapable of achieving net zero energy performance through on-site renewables, even after applying all available design and technology considerations.  This exception allows projects with these limitations to be developed in a way that creates similar ecological and community benefits as projects with onsite renewables.

Projects which are unable to provide renewables onsite because they fall under one or more of the project types listed below may locate renewables offsite, as long as the relevant criteria, are met:

The complete exception with all criteria and documentation requirements can be found  here.

Within the US, the regional grids are as defined by the  Federal Energy Regulatory Commission (FERC). Currently, there are 10 in the continental US. 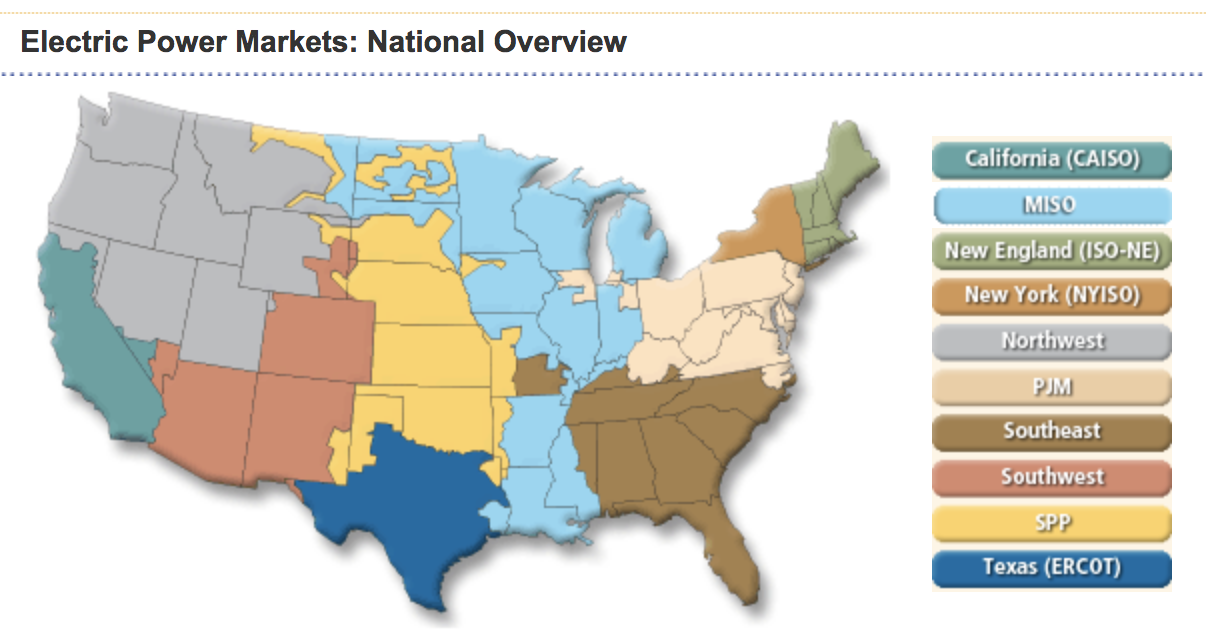 Exception  I06-E16 11/2018 Arbitrage of Project-Generated RECs   permits under certain circumstances, the exchange of the Renewable Energy Certificates (RECs) created from a project's renewable systems. RECs may be exchanged if the transaction meets the criteria laid out in either ExceptionI06-E10 4/2015 Government REC Sales (May 2017 Energy Petal Handbook p15), or the new I06-E16 11/2018 Arbitrage of Project-Generated RECs, which can be viewed in the Dialogue. Also see the revised Renewable Energy Certification clarification contained in the above-referenced I06-E16 Dialogue post.